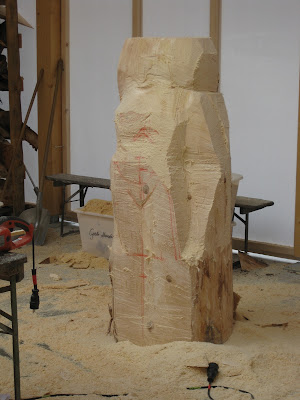 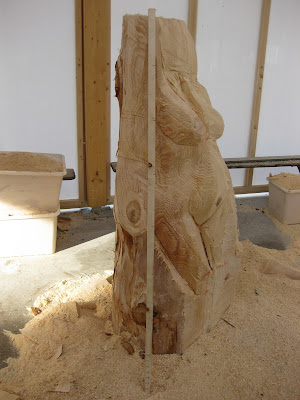 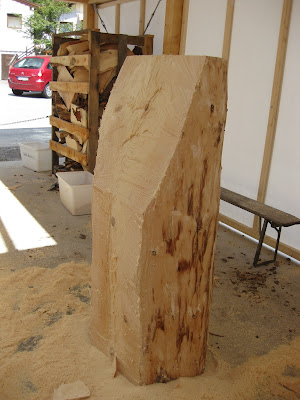 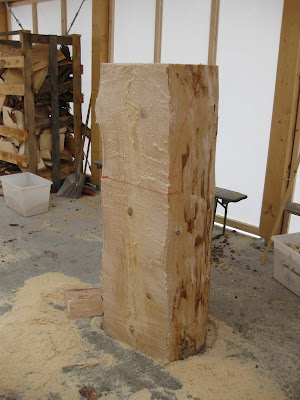 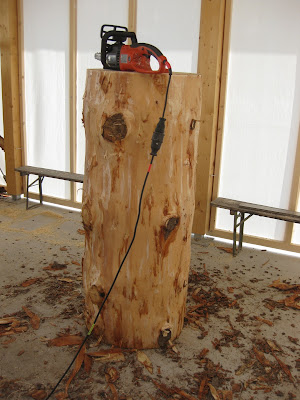 I found myself starting the day by pondering how I would go about extracting a figure out of this massive log. I got to class a little early and remembered that the first step was to de-bark the log so I could use the crayon to draw some lines on it. By the time the class started I had the log fully de-barked. We had ended the day before by talking about how we would start these carvings and I remembered that I must first square off the front and begin setting up the curve of the figure front to back. The female torso is leaning back dramatically with her head looking toward her left.

Michael started the morning by working around the room and discussing each person's carving and each person's unique challenge in starting their respective carvings. There was quite a variety of carvings ranging from a 7 foot tall giraffe, to a frog, a bull, an eagle's head, and several other human figures.

Once we were allowed to fire up the chainsaws I began the carving by squaring off the front plane, followed by the tilt backwards and culminating with a slight turn and twist to the left. Michael had explained that this was a way to get the dynamics of the figure started, by creating a powerful line backwards with a twist to the left. Once this was accomplished Michael had me begin setting up the outline of the right side of the figure. I marked a center line, matching the center line marked on the model, and took measurements off the model and transfered several points to the log. For measuring I had a stick cut to the exact height of the log. I measured off the height of the model, which was about 1/7th the height of the log, on one side of the stick and divided it up into an equal number of divisions. I chose to use 8. I numbered these divisions 1 through 8. I divided up the full height of the stick into the same number of divisions, marking them off on the opposite side. These were also numbered 1 to 8. Measuring and proportioning became as easy as taking a measurement off of the model with a pair of dividers, checking the measurement on the model side of the stick, finding the same proportional measurement on the other side of the stick, and transferring the measurements to the log. No proportional calipers necessary. The first cut of the log on the front became my reference plane from front to back, and my center line became my point of reference for side to side and height measurements.
By lunch the figure was beginning to be recognizable. We started the afternoon with another round the room discussion of each person's carving. Michael talked about looking for the composition of the figure first, not the details. He said looking for line, proportion and balance was more important at this stage than looking for details. He looked at each person's carving and model and identified the main lines and movement of the carvings. I spent the balance of the afternoon translating the model to log and by day's end had a pretty good start. Tomorrow I hope to have the basic figure roughed in so I can begin looking for and carving some of the details.