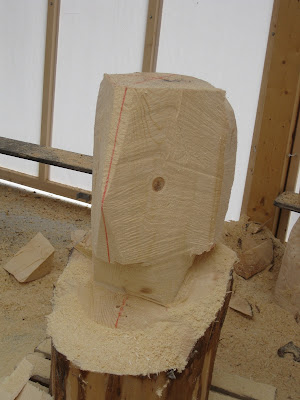 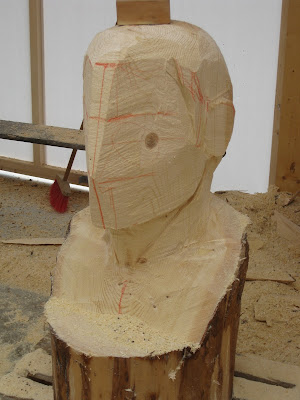 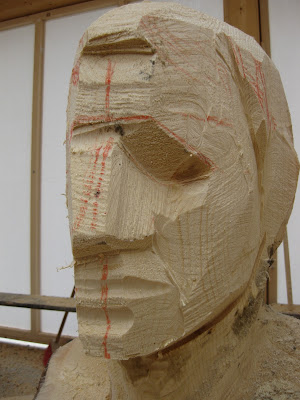 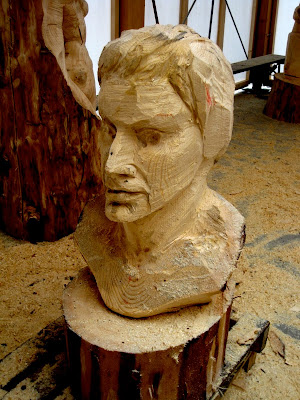 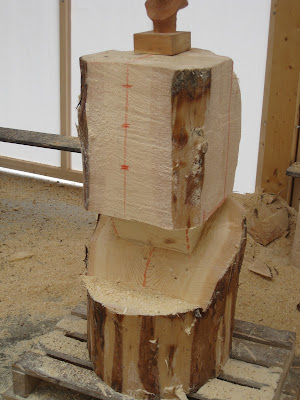 Today was the continuation of "Carving the Head with a Kettensager 101". I did pretty well up until it came time to wedge out the face. I had to take off the pieces in two cuts and of course they did not meet. Once I got done creating the two planes for the face I found that I had created the "man with the pointy face". Nevertheless I pressed forward with the carving, after all this was purely a lesson and a vehicle to learn some techniques. Michael had me set in the location for the ears next followed by creating the profile down the midline. Not much different than what one might do with carving tools. Here where it got very difficult. Firstly, you must create two planes, using the chainsaw, one for the tilt of the eye, and one for the side of the nose and sweeping across to the cheek bone. Next came setting in the with of the nose, the smile line, and the barrel of the mouth. Now came the really hard part. Carving an eye with a running chainsaw. I had an extra difficult job because firstly, since I created too narrow a face, my eyes had to be set in deeper. Secondly, I had knots dead center on each eye. The eye was created by using the tip of the chainsaw to first set in the inner corner, followed by additional depth under the eye, followed by additional depth on the outside corner. Did you ever try carving the fold of the upper eyelid with a running chainsaw? It ain't easy!!! Of course Michael made it look easy, but then he did the easy side of the carving (now I can say what all of my students always tell me!!) Just kidding of course. I spent the balance of the day completing the face and giving him some nice wavy hair. Today I will have Michael show me the ear and it will be finished.
Posted by Eric R Bunn at 9:21 AM