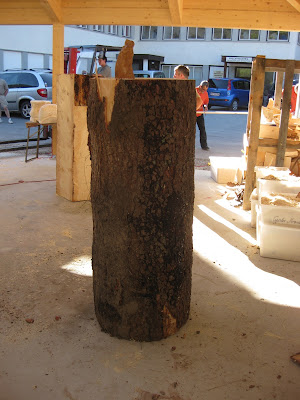 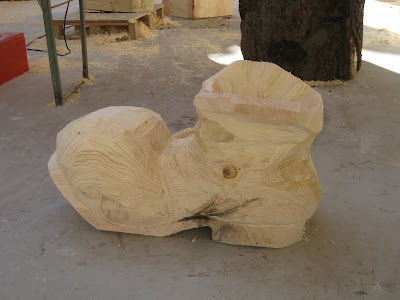 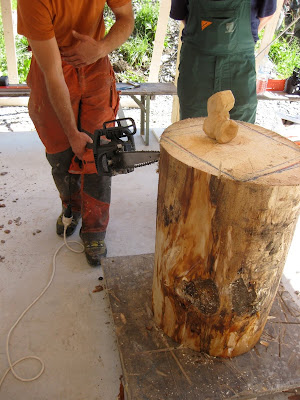 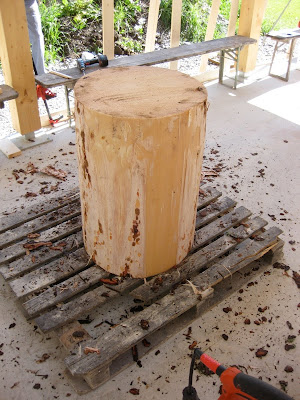 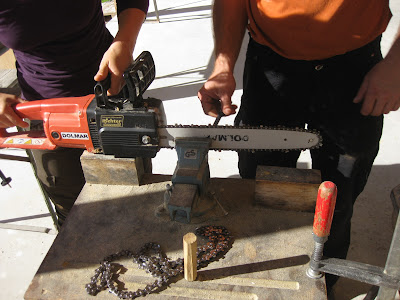 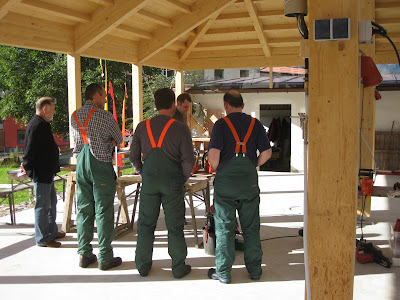 Chainsaw Carving is something I've dabbled in over the years but I've never had the opportunity to take an actual structured class, until now. I've had an interest in this type of carving since the early 90's and actually visited a chainsaw carver in the Catskills, by the name of Hal MacIntosh. Hal told me the best way to learn chainsaw carving was to go watch some chainsaw carvers, buy a chainsaw, and start carving. I did just that. I've been able to produce a few good pieces this way, but still wanted more instruction than watching someone else do the craft. It is next to impossible to find a class in the US. Fortunately, since falling in love with the Geislor Moroder School of Woodcarving in Elbigenalp Austria, 3 years ago, I had the perfect facility to learn this art form. We met last night at the new pavilion Martin Geislor is having built for the outdoor classes he holds at the school. It is a beautiful open air pavilion which is timber framed in the local pine. Our instructor, Michael (I will determine his last name for my next blog entry . . . shame on me), started the class by lecturing on the basics of the chainsaw, and did a great demonstration on how to sharpen the blade using a flat and round file. The lecture was of course in German (I am in Austria by the way) but a few of the other students spoke some english and were very helpful in translating for me. Michael speaks a fair amount of english as well and gave me me a little one on one training after the lecture to make sure I fully understood. He explained that we would be starting the class by carving a boot. He would use this lesson so we could get a chance to try out some cuts, while at the same time allowing him to evaluate each students ability. Everyone got a small model to copy from and we went to the log pile to pick out our first piece of pine. The logs were big enough around to allow us to blow up the boot about 4 times. After de-barking the logs Michael had us measure the extreme dimensions of the boot and mark off a rectangle on the end of the log that of course would be big enough to enclose the boot. Once the rectangle was determined Michael showed the group the best way to slab off the sides of the log with the chainsaw. We were working with electric chainsaws that had a dime sized tip bar on them. The short carving bar was not long enough to reach across the width of the log so Michael demonstrated how we could take the slab off in two cuts, one from the right and one from the left. Michael also showed us a couple of other types of cuts that could be practiced in the waste pieces before they were removed. We spent the balance of the day creating our boots and at about 3:30 we gathered for our critic. Michael went around the pavilion and gave a critic on the good and bad points of each person's carving. You'll find that chainsaw carving is very fast and everyone had more than enough time to finish the carving by days end. After the critic we all gathered in the model room to pick a model for carving. I chose (what else) a figure. Next stop, the wood pile, to pick out our logs. I found a log which was big enough to multiply the model about 7 times. The carving will end up being about 5 feet tall. Once the logs were cut and moved into position we ended the class for the day. It was quite a workout, and I am thoroughly exhausted but anxious to get started on the carving tomorrow.
Posted by Eric R Bunn at 10:29 AM