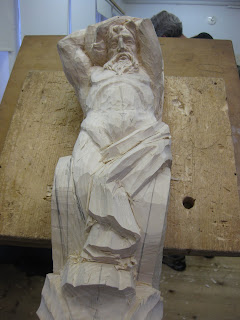 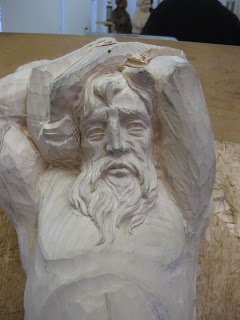 Today I learned some great techniques, from Pascal, on setting up and carving classical hair. He explained how to break up the forms into S shapes, followed by several basic planes and texturing with a small veiner and shadow cuts along the edges. You cross over from plane to plane with the veiner cuts from time to time, which breaks up the masses into smaller masses which can then be treated the same way for more texture if you like. He also showed me some great texturing techniques on the body using a 12 mm 11 followed by a large 9, which was used to blend in between the troughs left by the 11 (if that makes sense). I have one area of the body that he completed and I will leave his marks for future reference. This is the nice thing about doing a class here. They demonstrate techniques on your carving which is like 3D notes from the class. Today's job will be getting as much done as possible to both get some more weight off the carving and to bring it as close to finish as possible.
Posted by Eric R Bunn at 9:55 PM